I touched a kill block and didn't die

bro what the hell

HELL I TELL YOU HELL

this game is HELL 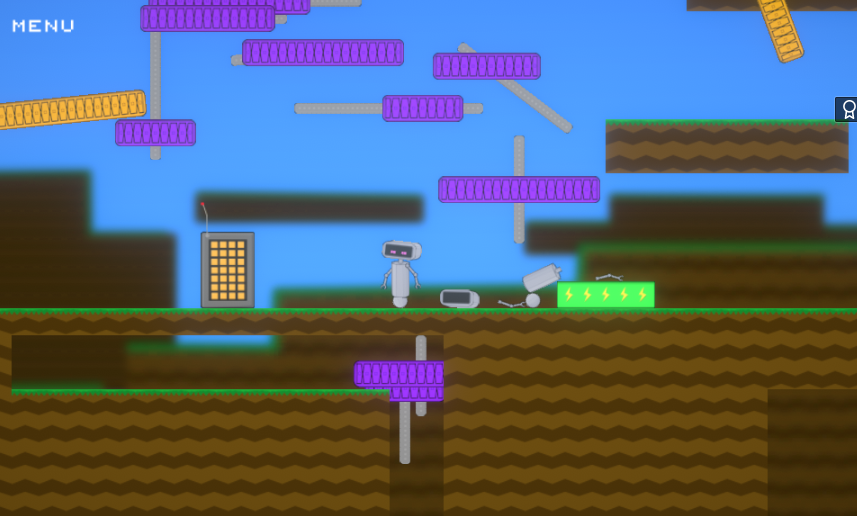 Got crushed by two moving platforms there and died.

Found a spinner that doesn't spin.

Edit: It actually does spin, but real slow.

Got launched super far by a spinner and landed on a platform with a transmitter.

Got stuck in a spinner.

Clipped through that same spinner somehow.

That fall led to ground.

AND THAT GROUND LED TO A TRANSMITTER.

Me too, even though I don't have a phone.

I enjoyed this somewhat, and I found it especially nice that the robot's eyes change color when it dies.

I like that you can get into a one cube gap, and by repeatedly jumping, you can launch yourself out, going higher than you normally would.

What I don't like though is the fact that if you go through a door, come back through the door to the previous level, and die, you spawn back at the "starting door" of the level and not the last one you went through.

While I understand the reason the game was made, I would have liked to see the game be limited to something like 50-250 rooms, and Bill is at one of the doors.

Then, when you find him, he runs away and a new screen is accessible that shows how many doors the player has found, and how many doors the player has found Bill at (hinting that you need to find bill at each door, but not saying it directly). Then, when you have found Bill at each door, he runs away again, but this time there is no change to the door/bill found screen. He would be at the first door you found him at, and the cycle would repeat endlessly.

So say there are doors A, B, C, and D, and Bill can be found at one of the doors in one of those levels. Which door you go through first (or better phrased, which door you find Bill at first) changes the order that bill travels in. So if you go into Door A first, then find Bill at Door AD, he travels to Door B,BD. But if you go through Door C and find him at Door CA, he goes to Door A,AB.

Maybe add an achievements page and have an impossible-to-get "Find Bill enough times that he stops running away" or something.

I know, I was memeing.

yas one of them is impossalbe

one f the levels are imposible

oof, they're randomly generated so idk how he'd even fix that
(unless it's actually possible and just hard but I wouldn't know bc I didn't see the level and also I usually assume that things are possible I just can't do them XD but I feel like in this case its entirely possible for there to be an actually impossible level bc he couldn't test each possibility)

A great little thing. But it'd be even better if its itch page was hiding the fact that it goes on forever. Even though it's infinite, making it to another transmitter feels like a progress and the exploration feels rewarding at times. It could actually trick some people into thinking there is some sort of an ending or a path branch with Bill at its end if there were no youtube links etc and it would be hilarious...

Can you make it for android??

how did you get the pixel font for the comments section

billy will kill you in ur sleep

Tell me if it is made from JAVASCRIPT

It turns out that most games are coded. Although I liked the game I don't think that is the best game ever.

It's made in unity

I spawned in a crouched position.

When you die to a death block, you can jump on your remains and get past it, though it's quite tricky...

I will just play it online

My pc cant handle this game 😅😅

what a 6 year old

Unlike you, I like jumping with SPACE and transmitting consciousness with UP.

space,w and up jump and E or F or some other button transmit

Wow. You can be a real pain in the neck. Oof.

are you my mum?

The best game ever

The game is not working

I don't understand something about this game

I've never heard of it.

But it doesn't... It's like a tree-maze. It literally moves you to the previous level so you could try another path - not forward

pretty difficult to not be able to move while jumping. physics suck tbh. sorry.

Go and play NES Castlevania. You could make a great game involving that kind of a movement. And it's even more limited in Castlevania, because there is no momentum.

like it a bunch! i love the way the robot's eyes change color each time you teleport to another level! :)

I'd like to play it but I have Linux and the browser version has an error.

Try to make it so there is no error. I've done it before so I know it's possible.